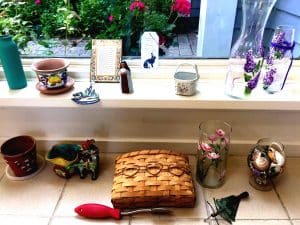 If you’ve ever sorted through family keepsakes of a recently deceased relative, you know how difficult it can be. The challenge: examine hundreds of artifacts from someone’s life, organize them in a meaningful way and keep them from overwhelming your life. This is an experience most of us dread because it forces us to face issues of mortality: People are often thrown into it as they actively grieve the loss of a loved one. But whether you’re a natural organizer or not, you can approach it as a chance to take stock of your life and memorialize the person whose keepsakes you inherited.

We surveyed a few individuals who’ve faced this scenario recently and asked them to share advice.

If a loved one passes away in an out-of-town city, you’ll probably be pressed for time to settle affairs. This was the scenario for Elizabeth, from Georgia when her mother-in-law passed away.

In the first phase, which she calls “Trash vs. Treasure,” her husband and daughter spent three days filling 50 garbage bags of newspapers, junk mail, etc.. to just reach the “treasures,” which were numerous for a woman who was an only child and a bit of a pack rat. 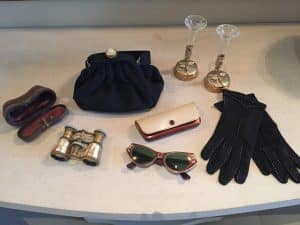 Elizabeth displays a few of the keepsakes from her mother-in-law, including opera glasses, gloves and a clutch purse.

During the next phase, nine family members met for the funeral and for serious sorting. This took place over a long weekend. One brother agreed to stick on financials and paperwork. While the other oversaw sorting through and identifying keepsake collections—everything from a rare doll collection to bone china collections and vintage clothing. We sold items such as vintage costume jewelry and clothes. “She was a classy lady,” Elizabeth says. “She had Lucille Ball-era dresses,” glamorous clutch bags and opera glasses, along with outfits from the ‘60s and ‘70s in pristine condition.

Secret locked in a chest

During the next phase, family members divided up items that they personally wanted or thought they could sell online. Once they’d brought the items home in a U-Haul, they discovered her mother-in-law’s high school valedictorian speech in a locked chest. “We were thankful that it was locked away because otherwise it might have gotten thrown out when they purged nonessential paperwork,” she says. Finding this was particularly meaningful for her husband, who never knew this about his mother. They further honored her mother-in-law’s legacy by purchasing a china cabinet to display the bone china and some other items holding sentimental value. 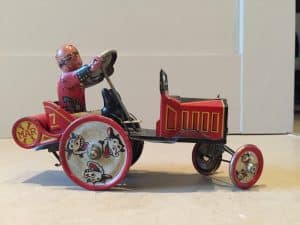 An antique toy is among the prized items  kept in the family.

Surprise! Not all fine china is valuable

To the dismay of many people, items people cherished and collected in the ‘50s, ‘60s, ‘70s and ‘80s, aren’t necessarily holding their value. Things such as Hummels, a series of German porcelain figurines, and Royal Doulton China can be difficult to sell for profit because most younger generations aren’t interested in collecting them. If something has a particular sentimental value, or is from a rare collection, Elizabeth says, encourage your parents or grandparents to consider parting with that item while they’re still alive. “My advice is 100% give things away when you’re alive because then you have the story to pass along with it,” she says. 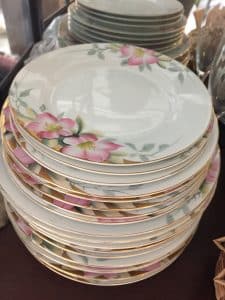 Hand-painted china plates aren’t as popular as they once were.

Lynn from North Carolina shares that a wise friend told her to expect the process of settling her parents’ estate to take at least three years. “I think I experienced almost every possible emotion as I went through my parents’ belongings,” she says. Instead of procrastinating over the task, as many are tempted to do, she dove right in. “For me, it was a necessary part of the grieving process.  My sister, on the other hand, avoided it for as long as possible because it made her too sad.” 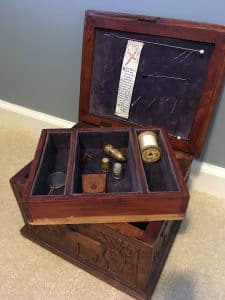 She also describes her parents who lived through the Great Depression as pack rats. Family relics included:  8 mm film footage of her mother as a single woman in her 20s. “I learned so much more about the woman I thought I knew so well.  One was a ski weekend with a bunch of friends. I never knew she had ever skied.  Another was a wild New Year’s Eve party that resembled so many of the ones I attended when I lived in NYC in my 20s.  A third showed her hunting Elk, cutting down a tree to smoke the meat, and then serving up Elk steaks. Who knew she could do all that?”

Other unusual items she came across include her grandparents’ WWII ration books, her great great grandmother’s 1917 antique wood engraved sewing kit and the receipt for the family dog, a purebred Schnauzer, from the 1960s: $37.

Deciding what to keep and what to part with

She and her sister decided to have an estate sale and hired a service to help them. One room they designated for keepsakes they wanted to keep or were unsure about.  “The goal was to ensure that we didn’t shed something that we would later regret.”

Next, they gave a few items to friends who they knew would appreciate them, and then donated office supplies, pet supplies, and medical supplies to various charities in the area. Then, they hired a professional firm to host the estate sale. Though the sale significantly emptied the house, roughly a third of the items did not sell.  Hence, they held a second estate sale on their own, which yielded good results.

There was still a good deal of “stuff” left and she and her sister both held garage sales, which she describes as “complete flops.” At this point, they singled out items of niche interest and sold them online and donated the rest to thrift shops. Broken metal objects were sold for scrap.

What to do with the photos?

Lynn and her sister are still sorting through boxes of photos. “Preserving family memories has been an ongoing process and one that I suspect will take quite some more time,” she says.  They are going through boxes and boxes of photos, slides, and film, deciding which to keep and scan. She says they plan to frame some of them and create a “best of” photo book. She’s also placed small mementos into themed shadow boxes. On the back of each shadow box is a pocket containing a description and history of the items within.”

Similarly, when Gabby, from New Jersey, recently spent a weekend with her extended family going through the keepsakes of her late Nonno (grandfather) they came up with a way to organize photos, documenting them in their own labeled and dated binders and folders. She calls the entire experience bittersweet. “One thing that really stuck with me was when we were all looking through my Nonno’s pictures and artifacts from when he served in the Korean War,” she says. “It was cool and interesting to see him at such a young age in that element. As we spent more time looking at photographs of him, we started to point out resembling physical features between my cousins.” 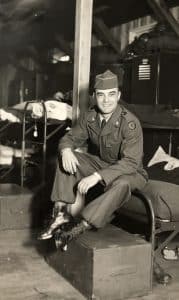 Gabby discovered this photo of her Nonno (Grandfather) from the Korean War.

Services such as Keepsake Solutions  will scan all different forms of media to digitize it. So, if you have a pile of old films or photos that you want preserved for your grandchildren to enjoy, don’t put off digitizing them and sharing with family.

Save it for another day

For those that have the space to store a deceased relative’s keepsakes, there’s not as much pressure to go through items and make difficult decisions about what to keep or pitch.

Gab from New Jersey recalls when she and her Mom spent an afternoon recently cleaning out the basement that has storage bins FULL of old, sentimental items such as photographs, elementary school projects, report cards, trophies, medals.

“The intention was to go through the ‘sentimental clutter’ and discard anything we could get rid of, thinking we’d fill a large garbage bag full of stuff,” she says.

But the process evoked so many memories that they were unable to throw any of it away. “We spent about 1 hour looking through homemade projects and photo albums,” she says. “My mom and I enjoyed strolling down memory lane that afternoon. It brought back lots of laughs and smiles. However, we plan to try again, this time with the mindset of not feeling guilty when throwing away this clutter and really deciding whether an item is worth keeping or not.”

Make decisions about keepsakes while alive

There’s a strong argument for encouraging your parents, grandparents or relatives to make decisions about their keepsakes while they’re alive either through notes or giving items in-person.

Dana, from Alabama, helped her parents downsize into an assisted living situation a few years ago before her mother passed away. While she calls the experience “exhausting,” she adds, “going through each keepsake helped me to realize how much my parents loved me: I could see how proud of my successes they were and what they considered a success.  I could tell by what they saved of mine and theirs, what made them happy, what intrigued them, what made them proud of me, and what was so important to them, that they did in life and wanted to save.” 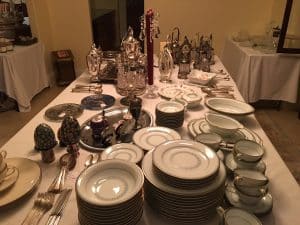 To help with the large house sale, Dana hired an estate sales company that handles everything from appraisals, to organizing the keepsakes for sale and donating the rest. “This type of a company is invaluable,” she says. “I made it through before the sale, and took a few things that I’d missed, which I still held dear. I saved several things from my Mom and Dad that I absolutely love, and which reminds me of them.”

The whole process, Dana says, helped her when she recently downsized a 4-bedroom, 5,000 square foot home to a 2 bedroom/1 bath, 1,600 square foot home. “Our lives are a bit minimalistic and yet that is actually freeing to me,” she says. “Things do not matter in life, people do. It is your relationship with others that matter. So, document those people and relationships.”

So, however you choose to remember your loved ones, remember, no matter how many sentimental keepsakes you surround yourself with to remember them, it’s the memories not the things that will live on in your heart. 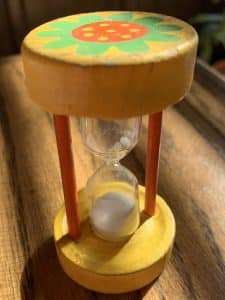 Patty recently sorted through her parents’ belongings after her Mother passed away. Items of particular note: Her Mother’s first pair of eyeglasses from the 1930s, a clutch bag from the 1950s and a beat-up, hourglass egg timer from the 1970s, which she retrieved from the donation pile three times. Her other stories include How to survive a family road trip this winter. 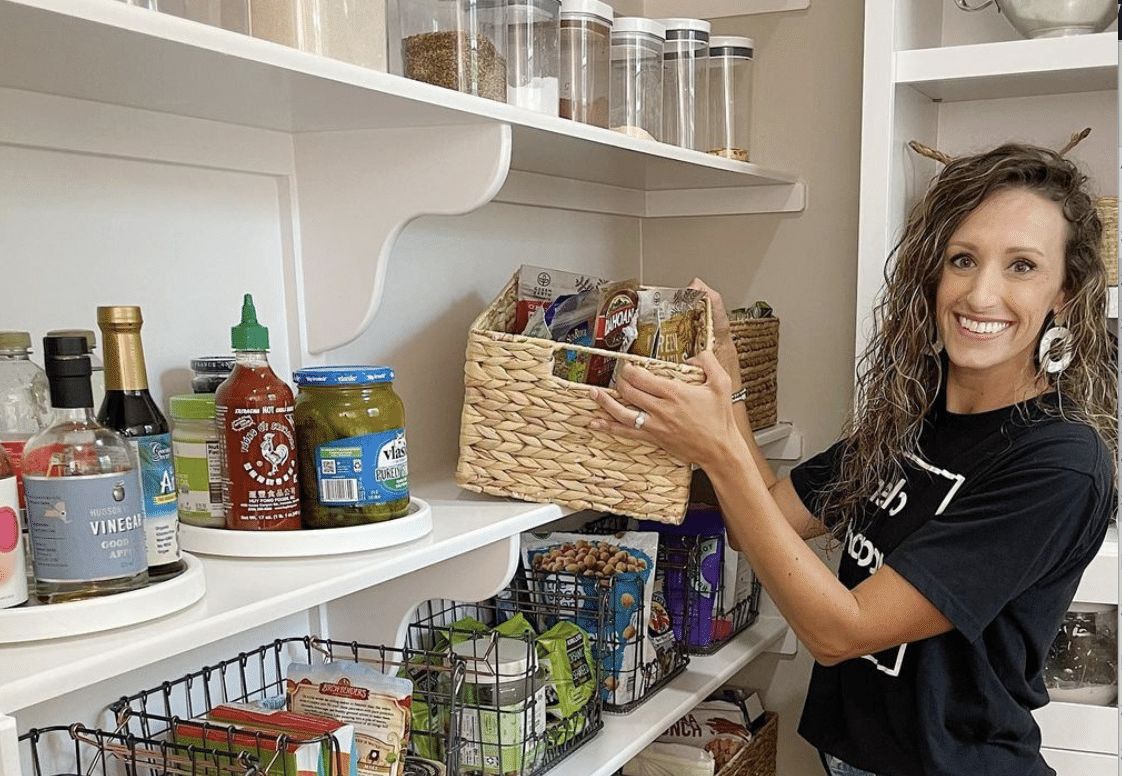 An organization expert shows how to conquer the clutter