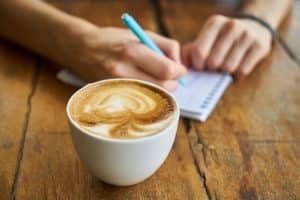 Starting the day with a cup of coffee is the ritual in most homes, but for pregnant women, it becomes new territory. We all know that too much caffeine while pregnant is bad for you and the baby but surviving without coffee is not an easy feat.

How much coffee can you drink while pregnant? Here is everything you need to know about coffee consumption and how to be safe about your caffeine intake.

What The Experts Say

Since only a few studies have been done on the direct effects that coffee has on a developing baby in the womb, it’s hard to say for sure exactly what the long-term effects are.

Some animal studies have linked caffeine use during pregnancy to birth defects. However, studies of human pregnancies have not been conclusive in determining a relationship.

There is also some mixed evidence to suggest that there is a relationship between caffeine consumption and miscarriage. Therefore, if one were to limit their caffeine intake during pregnancy, the best time to do so would be during the first trimester, when your miscarriage risk is the highest.

But fortunately for all the coffee lovers out there, the general consensus among doctors is a daily intake of 200 milligrams, or less of caffeine is fine. If the only caffeinated drink you enjoy is coffee, you can safely have a cup or even two in the morning.

Types Of Coffee And Their Caffeine Amounts

We will dig a little deeper into what that could mean as it pertains to different kinds of coffee. Thanks to Starbucks and creative minds, there are seemingly hundreds of way to enjoy the drink, each with varying levels of caffeine.

Instant coffee has the least amount of caffeine in an 8 oz cup than other styles of the drink. With only 63 milligrams in a cup, you can have up to 3 servings in a day while pregnant without needing to worry at all about any negative side effects. 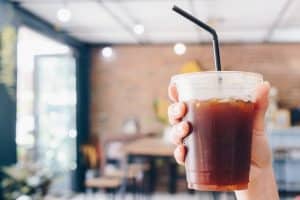 Most specialty coffees from a coffee shop contain espresso shots in them. Each 1oz shot of espresso has up to 64 milligrams of caffeine in it, meaning to stay within the 200 mg zone safely, you need to limit the shots of espresso in your drink to 2-3 daily.

This is the most popular kind of coffee for home brewing. It’s hard to pinpoint the exact amount of caffeine in each 8 oz cup, since every roast type and brew will have different levels. On average, a cup of brewed coffee has 164 mg of caffeine, meaning you shouldn’t have more than a cup or so a day.

With over 200 mg a cup, cold brew is the only coffee drink you should avoid when pregnant. The longer coffee grounds sit in water, the higher the caffeine amount will be. Cold brew sits for 24 hours, which shoots that count up. You can add equal amounts of water and creamers to dilute it and make it safe to drink.

As long as you stay within a safe range of caffeine intake listed above, coffee is fine to drink while pregnant. Paying attention to what goes into your body is important at every stage of your pregnancy, but don’t let it deter you from enjoying a cup of joe in the morning.